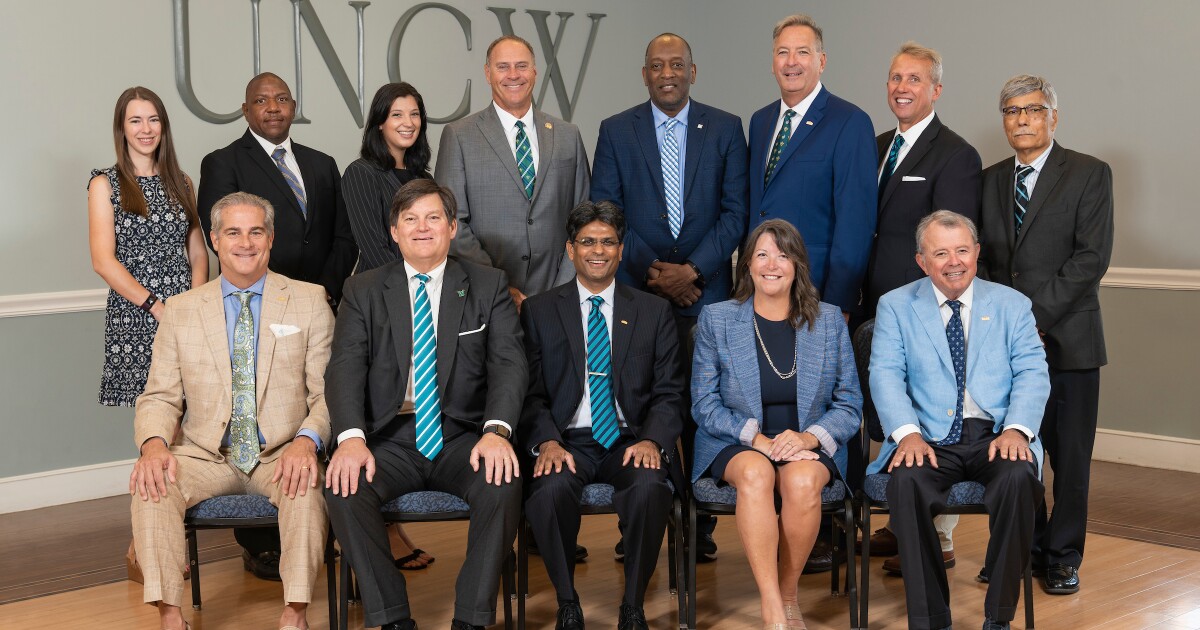 Alongside the new Chancellor, the UNCW Board also saw new appointees and a new President, Hank Miller III, who is also Pro-Tem Mayor of Wrightsville Beach and Vice President, H. Carlton Fisher . The new members are Perry Chappell, who was appointed by the University of North Carolina Board of Governors, and Kevin Sills, who was appointed by North Carolina House Speaker Tim Moore..

Beginning his first report, Volety – a former UNCW dean, faculty member and researcher – said returning to college was both “rewarding and humbling”. He said that in the future, his reports would be more streamlined and would not have detailed charts, tables and statistics, as he wanted to tell more stories from the university to administrators. But they would continue to receive more detailed information and reports at their committee meetings and throughout the year.

Volety began his first four weeks as chancellor by going on a listening tour with students, faculty and staff, alumni and other community groups. Volety said that in the future he would like to engage with the UNCW Faculty Senate.

“I wish we had a magic wand to give everyone what they want; but unfortunately we don’t, but nonetheless, there are things we could do collectively to move forward,” Volety said.

As a result of these conversations, Volety said people on campus and the community at large want it to be student-centered, expand resources and support to faculty and staff, and engage with of the community through athletics and the arts.

Volety reviewed his top priorities for the university, including holding ‘lots’ of town halls with the community – and establishing a strategic plan building on the work that had been started under the former Chancellor José Sartarelli.

For this strategic plan, which he expects to complete by the spring of 2023, he envisions having 3-year, 5-year, and 10-year plans, which tie into the goals of the UNC system.

In order to measure its success toward the plan and ensure accountability, Volety said it would like to develop public scorecards that have specific measures of those goals — and the costs associated with them.

Volety said it’s important that these shots are “our shots”, not just what he wants to see.

He then explained the revised funding formula of the UNC system.

Volety said this revised funding formula would increase support for undergraduate students and summer schools; however, funding for masters and doctoral programs will be significantly lower.

In his opinion, the university will have to assess students at these levels of education – and how these new funding formulas might dictate that these programs “may have to change”.

“I know people hate it when I say that, on a micro scale, it’s not a business. But on a macro scale, it’s a business. Right? There are so many moving parts and a finite amount of resources. How do you optimize the use of those resources to make this institution the best it can be, recognizing that the focus is on the students?” Volety said.

New software, Anaplan, will help Volety and his team determine the impacts of that revenue, which in turn will allow them to determine enrollment options in the future.

Additionally, Volety said he focuses on interdisciplinary programs. He gave an example of drug development – ​​these future workers should have knowledge of, for example, biology, chemistry and data analysis in order to bring a new pharmaceutical product to market.

“Whether we like it or not, analytics permeates every aspect of our lives,” Volety said.

He would also like to see growth in the marine science curriculum, computer analysis, and health care programs, which would produce more nurses, physician assistants, and physical therapists. He also mentioned his goal of increasing the university’s fintech programs so that students are ready to join companies like nCino and Live Oak Bank.

On improving medical education, Volety said, “Who knows, we might have a medical school down the road.”

He added, “there is a clear line of sight between curriculum and career, tearing down the walls, bringing practitioners to campus, which I know the faculty are already doing.”

Volety said his guiding principles were first and foremost whether his decisions were “good for the students.” He also said it was a priority for him to ensure that what the university invests in is good for the “taxpayer who funds us”.

Other imperatives for Volety are to focus on enrollment numbers, finances, student experience, mental health and wellbeing, and diversity, equity and inclusion.

On DEI, Volety said, “I want opportunities for every individual to succeed.”

And the connection between enrollment and finances is important to Volety, as he cited that demographic trends show student numbers will begin to decline from 2025.

Volety ended his presentation by making commitments to faculty and staff and the entire campus community.

“I promise to listen to all points of view, to take all of this information into consideration and to make a decision that is in the best interest of this institution. And I’ll give you the rationale for the decision. Many times we will agree, but sometimes we may see things differently, but my promise is that every decision I make is in the best interest of this institution,” Volety said. “My main role is not to tell teachers and staff what to do; they already know what to do. My role is to work with all of you to define the vision and direction of this institution. I will do my best to get the necessary resources for faculty and staff, get out of their way, and let them do the work.

Volety also answered questions from former administrators Dr. Yousry Sayed, Malcomb D. Coley and Dr. Jimmy T. Tate. Sayed focused on the programs Volety wants to focus on – he reiterated his commitment to medicine and fintech. Tate asked about expanding its reach to rural areas, and Coley said its recruiting and outreach efforts should extend beyond the state of North Carolina.

New chairman Hank Miller said it was the board’s job to help Volety succeed. He then announced that the trustees would sit behind closed doors but did not give the general status. But said that during this session he wanted to “hear something about you [other trustees] that nobody else knows because it’s going to make us more vulnerable and more open and honest. And I look forward to serving with each of you.

Krissy Vick, media relations specialist, emailed to clarify the status of the closed session: “The written motion was ‘a motion, as permitted by the Open Meetings Act, meet behind closed doors to prevent premature disclosure of an honorary award or scholarship; examine the qualifications, skills, performance, conditions of appointment of a civil servant or public employee or of a future civil servant or employee; establish or instruct staff or agent regarding negotiations of the amount of remuneration or other terms of an employment contract; and to consult with our attorney to protect attorney-client privilege.

Vick said the directors had approved the personnel items and honorary awards as discussed behind closed doors – but the items are not public records.

2022-07-29
Previous Post: Money is scarce, should I suspend the payment of my occupational pension?
Next Post: Saudi Arabia’s $1,000,000 Mirror City Plan Looks Like a Video Game Concept and Probably Should Stay That Way