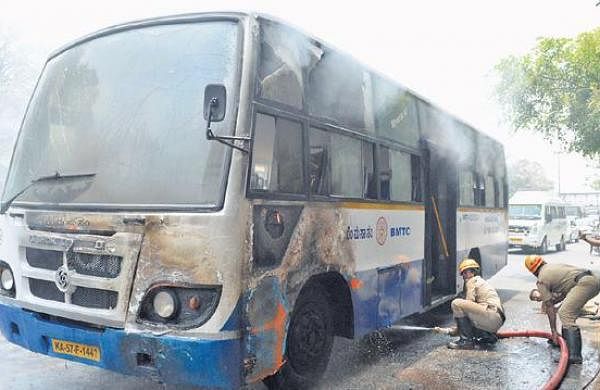 BENGALURU: Electrical shorts in the starting device are believed to be the cause of the fires on all three BMTC buses in the past three months. Speaking about the bus fires in the three noon buses, V Anbu Kumar, Managing Director (MD), BMTC, said that BMTC has developed a strategy to prevent such fires in the future.

“To avoid electrical short circuits in the starter sets of midi buses, BMTC authorities advised drivers not to turn off and restart the engine at every traffic light. This has been followed before to save diesel. It has Drivers were advised to start the bus at the start of the journey and not switch it off until the end of the journey. The starters are overheating due to repeated switching on and off and this caused the fire,” the MD said.

The power line and the diesel line are side by side in the start assembly and if there is a diesel leak, it causes smoke and then a fire. “Previously, drivers would start and stop nearly 100 times on each trip to save diesel.

This is a mechanical failure and the BMTC regrets the inconvenience caused to commuters. Most midi buses have traveled around 4-4.5 lakh kilometers and are not old buses. The problem is caused by a short circuit and the problem will be solved,” the MD added. NS Nandiesha Reddy, chairwoman of the BMTC, also said an investigation was underway into the fires.

“Of the 1,400 employees made redundant, 700 employees have already been reinstated. There are about 400 employees who are yet to be reinstated and they will receive the appointment letters as their cases are settled by Lok Adalats. Reinstated employees will lose two raises,” said NS Nandiesha Reddy, President of BMTC.