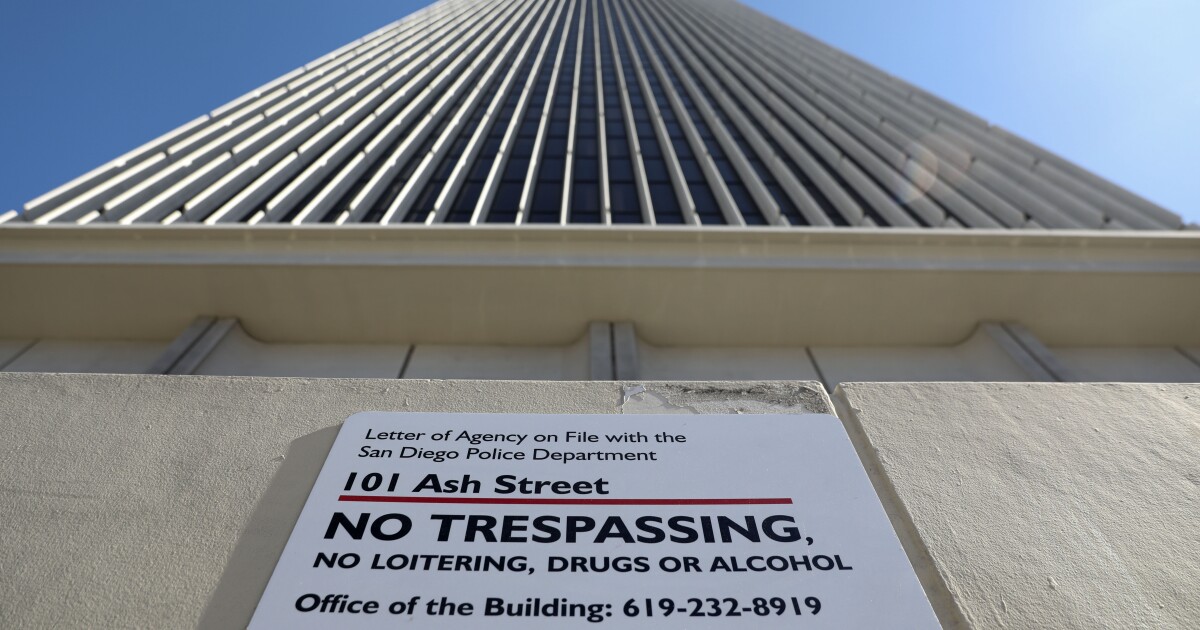 The cornerstone of Mayor Todd Gloria’s plan to settle with the main defendants in the Ash Street litigation is to pay $86 million in cash for a 19-story skyscraper that cannot be safely occupied.

Most of the money would come from dozens of already budgeted projects like paving streets, flood control and improving city parks. These efforts would then be funded by a new bond that would be paid in future years.

This story is for subscribers

We offer subscribers exclusive access to our best journalism.
Thank you for your support.

In announcing its settlement agreement last month, Gloria said the city would pay $132 million to buy out the leases for the 101 Ash St. building and nearby Civic Center Plaza that are the subject of lawsuits filed by the city.

Financing the purchases would add millions of dollars to that cost, according to one of dozens of additional reports provided to city council ahead of the vote scheduled for June 27.

“The actual total debt service of a 30-year bond backing the two property acquisitions would be $207 million,” a footnote in Schedule T reads. A similar bond that would be repaid over 14 years would cost $148 million, according to the same report.

According to COO Jay Goldstone, paying off leases with existing cash and then borrowing to fund capital projects makes the most economic sense.

“The mayor’s proposal represents the lowest cost of funding for settlement agreement funding,” he said in a statement.

The projects whose funding would be diverted were chosen because they were budgeted for last year or this current fiscal year and work has not yet begun, Goldstone added.

“Staff are proposing to substitute the funding source of cash for commercial paper/bonds-rental income,” he said. “All ongoing projects will continue uninterrupted.”

Even so, the city’s top lawyer said the proposed borrowing plan was authorized.

“Our office has reviewed the proposed settlement and related actions and has no legal concerns,” Elliott spokeswoman Leslie Wolf Branscomb said by email.

The settlement, which was negotiated in confidential mediation sessions that spanned 18 months, was dropped from the agenda minutes before the scheduled start of the board meeting.

Gloria then said he wanted to give the board and the public more time to review the material. He said he would be back for a vote in about 30 days.

The proposed settlement is a good deal for San Diego taxpayers, the mayor said, because it ends a legal dispute that could otherwise take years to resolve and also provides certainty for the city’s future real estate planning.

The proposal asks the city to divert some $73 million in current spending to buy Sempra Energy’s former headquarters on Ash Street, which city officials have acknowledged they could never move into.

According to a city consultant, the property requires up to $115 million in repairs and asbestos removal before it can be safely occupied. It has been vacant for almost a few weeks since the city approved the lease in 2016.

City officials said they have carefully reviewed the plan for using capital improvement funds to acquire the Ash Street building and “it has been determined that there will be no impact on implementation timelines.” or construction of these projects”.

The mayor’s office declined to provide details to support its conclusion.

It also did not release a list of specific projects whose funding would be redirected.

For example, the report to council says $15.8 million previously earmarked for “flood resilience infrastructure” would be diverted to the Ash Street acquisition; $8.7 million in “sidewalk repair and rebuild” projects would change hands; and $6 million in “city facility improvements” would be moved.

Some $18 million budgeted for “standalone projects” would also be diverted.

In total, more than $73 million from capital improvement projects would be used to purchase the Ash Street building. The rest of the buyout money would come from monthly lease payments the city had previously budgeted, according to the mayor’s office.

The surety scheme is a relatively rare public funding strategy, and some experts do not embrace it.

He said he was bothered by the lack of detail in the mayor’s proposal, as well as the plan to use capital improvement funds to pay off Ash Street’s lease and replace it with cash borrowed.

“I can’t believe they have money sitting there that can be magically replaced by new money coming in,” he said. “A budget is a public document that represents the direction a city is taking. Politicians should not be able to change this at will.

The city sued landlord Cisterra Development and its lender, CGA Capital of Maryland, alleging that council-approved leases in 2015 and 2016 for Civic Center Plaza and 101 Ash St. were illegal.

Among other allegations, the lawsuits claim the deals violated state anti-corruption laws. The city argues that real estate broker Jason Hughes collected $9.4 million in fees from Cisterra after representing the city in negotiations for the two properties.

Hughes, who previously served as a volunteer adviser to former mayor Kevin Faulconer, acknowledged the payments last year. He said he told Faulconer and other city officials that he intended to seek compensation for his work and provided as evidence a 2014 letter he sent to the city’s property manager. time, Cybele Thompson, which she accepted.

In a deposition last year, Faulconer said he didn’t know Hughes had received millions of dollars from the two deals; other city officials provided pretrial testimony indicating that they knew Hughes intended to be paid.

The settlement plan that Gloria proposed last month provides Cisterra and CGA Capital with all the money they were due to collect under the disputed leases — one reason the city attorney recommended the council reject the lawsuit. ‘OK.

It also indemnifies the two companies from any other liability, meaning the city would be liable for legal fees and damages recovered by Hughes – who remains a defendant – and one of the contractors also named in the cases.

The proposed settlement also does not affect a separate lawsuit by the ratepayers against the city, Cisterra and CGA Capital. This claim alleges that the Ash Street lease should be canceled because it violates a provision of the state constitution.

All three cases are due for trial early next year.

The city is also facing dozens of legal complaints from current and former employees and contractors who claim they were wrongfully exposed to asbestos while working in the Ash Street building. These cases have not yet been scheduled for trial.

Goldstone said the mayor plans to send the settlement plan back to city council without any changes on July 26, a week before the committee begins its five-week legislative recess.