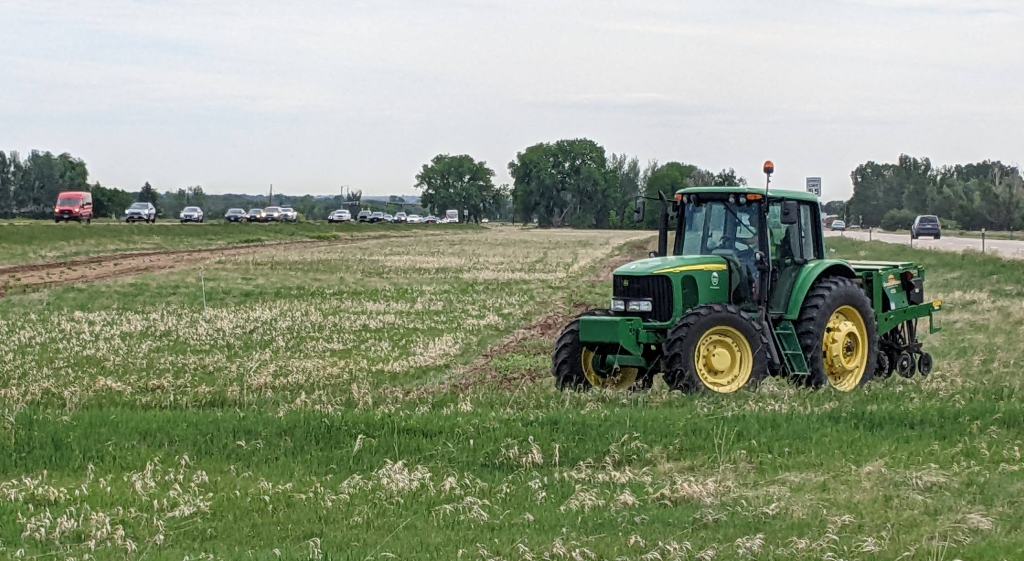 The CDOT has a pollination plan for the diagonal route

Johnny: What is happening with the plowed strips in the median of the Diagonal between Hover and Colo 52? Doesn’t seem planted with anything. Thanks. — Median level of curiosity

Median: When I first noticed these tapes a while ago, I thought to myself, “Someone is going to ask me about this.” I then thought of diving into an answer.

But my delay was fortuitous, because as I was driving towards Boulder on Thursday morning, I spotted a tractor pulling a piece of equipment along one of these rows near Niwot. I turned at the next intersection, went back and found a place to park nearby. The operator was outside the tractor inspecting the equipment, so I trotted over to him.

Malcolm Wiley, a friendly man wearing a Boulder County Parks & Open Space cap, said he was pulling a seeder, planting native grass along areas that had been previously plowed. His efforts, he said, were part of a Colorado Department of Transportation plan to turn this section of Colorado 119 — roughly from Fordham Street to Monarch Road — into Colorado’s second “pollinator highway.” the state. The first is Interstate 76 near Julesburg.

To make these strips of land more welcoming to pollinator-friendly flowers, crews had to kill and cultivate the smooth bromegrass that inhabits the median. Pointing to the grass that reached well above my ankles, Wiley noted that smooth brome is not native to Colorado, but is used along highways here because it excels in this climate and crowds out weeds. If you want wildflowers, you can’t have smooth brome.

Wiley told me Joe Swanson, the county’s senior weed specialist, could answer more questions, so I thanked him and let him get back to work.

“(CDOT) reached out to us because we have the expertise, the equipment, so it’s kind of a joint effort,” Swanson told me.

This expertise consists of killing weeds and revegetating. County work on these tapes began last summer.

“Glyphosate was really our only option,” Swanson said. “We then moved on to tillage, then to seedbed preparation, and now we put grass.”

The grass that Malcolm was planting on Thursday is switchgrass. “It’s a native, warm-season perennial that rivals smooth brome,” Swanson said.

The intention is to create a barrier that will prevent bromine from encroaching on the flowers. Crews will plant flower seeds this fall and possibly next spring.

“At this time, we have a mix containing 15 species of wildflowers native to Colorado and adapted to the local Boulder County ecoregion,” Jason Roth, regional environmental project manager at CDOT, said in an email. “People we consulted also suggested adding native grasses to the mix, as they would offer a better chance of success given that they are generally better at competing with existing invasive grasses. Therefore, we also have six different native grass species in the existing mix. »

As for the flowers, Roth said the CDOT aims for a diversity of colors and bloom dates “to provide the maximum benefit to as many pollinating insects as possible.” Native milkweed will be added to the mix to support monarch butterflies.

Median, you could start to see flowers blooming along the Diagonal as early as next summer, although it will likely take several seasons for these strips to be fully filled. The success of this $20,000 project will be determined by the effectiveness of the switchgrass barrier against bromegrass and other weeds that would benefit from the absence of bromegrass.

I had to ask: does a successful project mean more bug splatter on windshields?

“Even if this project is a resounding success with native wildflowers displacing existing invasive weeds on a large scale (it’s unlikely),” Roth said, “I suspect the relative number of insects…could increase slightly but not to levels that would be obvious or noticeable.”

Send your questions to johnnie@times-call.com.