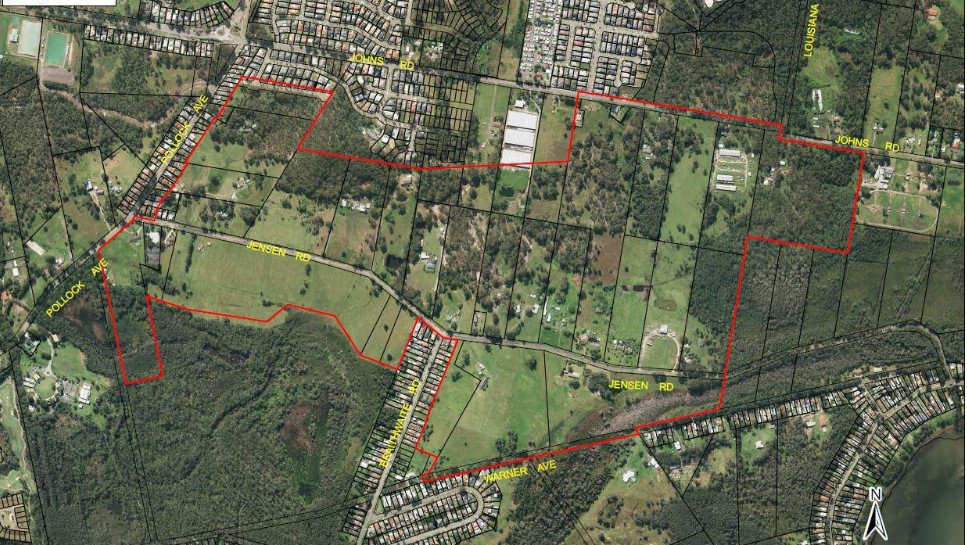 Rezoning of 1,200 lots adopted but blocked by the contribution plan

By: Randy L. Ladd
In: Contribution plan
With: 0 Comments
FacebookTwitterLinkedinMix

A proposal to rezone 143 ha of land to allow approximately 1,200 low density residential lots in Wadalba East was adopted at the September 28 Council meeting.

The rezoning documents will go to the state government for approval which would allow Council to change its local planning rules.

However, the council added that it would wait until its updated Warnervale District Development Contribution Plan is adopted before proceeding with the stages of modifying the local environmental plan with the new zoning that would finally allow development on the ground.

The 39 landowners will still be paralyzed until this happens (see separate article).

City planner Chris Smith, speaking at the public forum ahead of the meeting on behalf of the landowners, said the draft contribution plan still had a number of steps ahead of its operation, which he said would take six months or more.

“I must stress that it will be at least 12 months before the first development demands in Wadalba East are ready to be determined, which should be ample time for the Board to finalize the draft contribution plan.”

Cr Bruce McLachlan attempted to have the two events run simultaneously, but staff explained that the development contribution plan had to be done first, otherwise Council would not be able to recoup the costs of infrastructure.

Cr Jane Smith would not accept Cr McLachlan’s suggestion but added her own amendment that landowners would be allowed to voluntarily widen the wildlife corridor on their properties.

The plan had already widened the wildlife corridors from 30 m to 40 m.

The site is accessible from Johns Rd, Pollock Ave and Jensen Rd.

The adopted plan will allow development except on flood-prone lands and areas required for conservation, recreation and infrastructure purposes.

During his speech, city planner Chris Smith said landowners fear that increased biodiversity requirements, both at the council and state level, will have a significant impact on expected residential yields. for this strategic area.

“This area has been on the urban liberation radar for decades, renamed 2A and 2B in 2010 as part of the planning ministry’s North Wyong Shire structural plan,” he said.

“The Planning Ministry has since revised the number of new residents up to 92,000 by 2041.

“Yet, throughout the years of the assessment process, there was a difference of opinion and expert reports regarding the widths of the green corridors.

“Our greatest concern is that throughout the report, staff indicated potential for further corridor widening and additional vegetation retention on a site-by-site basis as future DAs are submitted.

Smith said there were a number of inconsistencies and uncertainties between Warnervale’s Draft Contribution Plan and the Draft Development Control Plan.

Examples: a pocket park appearing on the structure plan but not on the contribution plan; uncertainty about the future appropriation of green corridors; expectations regarding the flood studies to be carried out DA by DA; and, the requirement to prepare master catchment plans was unclear and likely to result in harm to landowners who did not develop immediately.

He also mentioned that another barrier to delivering the first homes was the ability to hook up to sewers.

“A maintenance strategy has been developed and adopted in the Council’s developer service plan, but work under this strategy is not expected until 2026,” he said.

He suggested that with the council’s vote at the same meeting on economic development and economic recovery and resilience, councilors should consider moving the planned sewer infrastructure work from 2026 to a more immediate timeframe. corresponding to this rezoning.

“This should not be viewed as a loan or a gift, as this investment in community infrastructure is recoverable through the Council’s developer service plan.

“The readjustment of the advice will bring certainty, investment, job growth and housing to people on the coast,” he said.