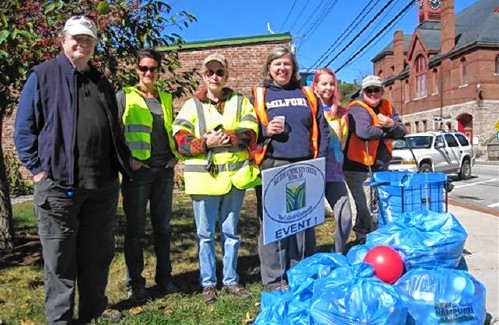 Community Center Committee Member Sara Spittel is running a Road Adoption Program this year to ensure all roads in Wilton get the attention they need, and from April 16-30 the center is encouraging residents to participate in a roadside garbage collection effort.

Spittel said she was compelled to undertake the project after noticing that none of Wilton’s state highways had been adopted under the state’s Adopt-a-Highway program. She made a spreadsheet of not just the National Highways, but all the roads in Wilton, and said she used her Rolodex, calling residents she knew from her work on various city councils and asking them to adopt their route for spring cleaning.

Since the start of his campaign, Spittel said about 80% of the city’s roads have been “adopted” by the residents who live there. It aims for full coverage.

“We have about 52 miles where people said they were happy to clean up part of it,” Spittel said. “I think it’s an amazing community. I am delighted with the response and confident that we will be able to get 100% of the roads cleaned this year.

Spittel said more than one resident can “adopt” their route. Adoption means a resident commits to cleaning up litter on the road during the last two weeks of April and at other times of the year they notice the litter if they can. Spittel said some roads have yet to pass, including Intervale Road, Mason Road and Route 101 from the Milford town line to Route 31. She said the final stretch of Route 101 is Most important.

“It’s the longest stretch of road in town and one of the dirtiest,” Spittel said.

Community groups have adopted other sections of the highway. The Fire Department adopted the stretch from the Temple town line to Route 31, and the Wilton Lions Club adopted Route 31 south to the Greenville town line.

Spittel said it was important for the community to help shine their town.

“It’s a sign of our pride in our community, to keep it clean,” she said.

On the roads, people are reminded to be mindful of traffic, ticks and poison ivy by wearing reflective clothing, gloves, boots, long pants and insect repellent.

Blue bags for roadside litter can be picked up free of charge at the Wilton Recycling Centre, Wilton Town Hall, Wilton Post Office and the Wilton Free Public Library. Filled bags can be returned to the recycling center during normal hours. It is not necessary to sort household waste. Any residents who need help getting bags filled at the recycling center can text 603-930-0768.