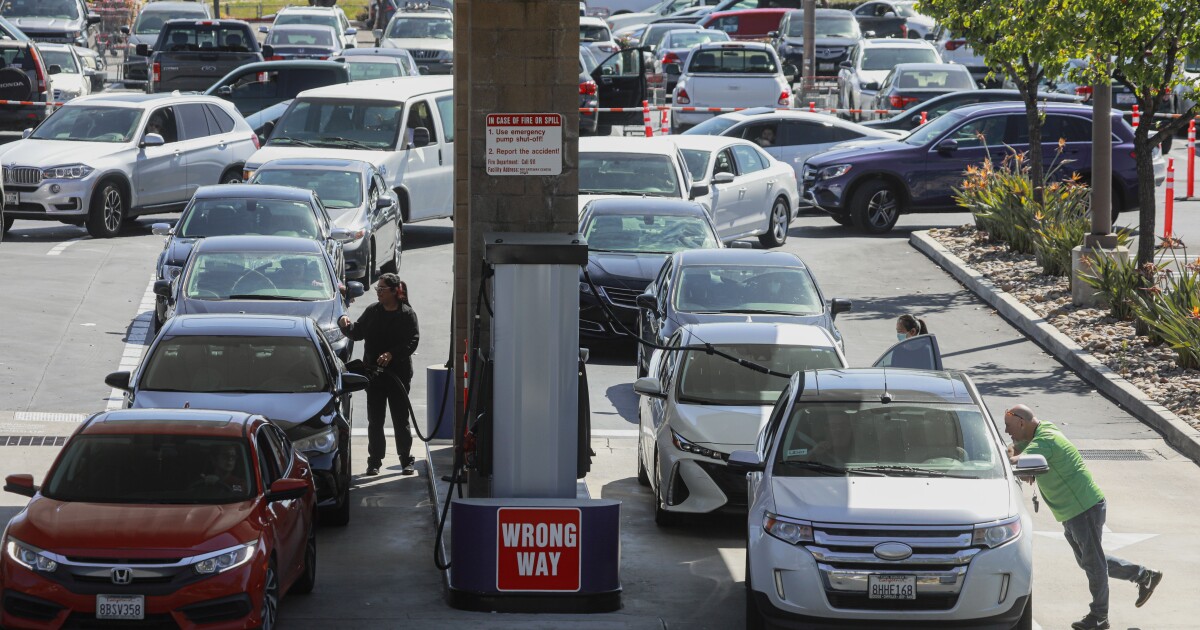 The plan, which has yet to be approved, also includes $750 million in subsidies for free or significantly reduced transit fares, as well as some tax holiday.

The governor’s plan has been criticized by many fellow Democrats who say the money should go to people in need, not the wealthy who are more likely to own cars.

His plan would cost the state $600 million to suspend the diesel sales tax for a year and $523 million to suspend gasoline and diesel excise tax inflation increases. The overall plan, including direct payments and transit fees, is estimated at $11 billion.

Other states, such as Florida, have temporarily suspended gasoline taxes. But critics say gas companies could simply raise fuel prices and that leaves lawmakers with less money for public transit and road maintenance.

NO: The indiscriminate distribution of rebates not only to gas consumers but to all registered California taxpayers is a highly inefficient and inequitable process. The policy of using taxpayers’ money to subsidize car registration holders is essentially a handout paid by everyone. Tremendous cost controls now in place force Californians to pay the highest gasoline taxes in the country. It would be far more efficient, sensible and appropriate to simply suspend the highly regressive 51 cents per gallon surcharge.

YES: But first, the funds should only go to gasoline car owners, not electric car owners. The big question is that this could be an opportunity to test the likelihood of Californians actually being weaned off their cars for public transportation. With gasoline being very expensive and public transit being free or heavily subsidized, will people actually try public transit? Stay tuned.

NO: In many ways, this is a bad idea. California currently has a budget surplus. If the state doesn’t need the money, then definitely reduce the tax. But we also need to recognize that gasoline taxes fund transportation infrastructure, fight carbon emissions, and control the use of gasoline in cars. Maybe use the money to speed up the construction of electric charging stations! Gas prices will eventually come down and this will be seen as a grand gesture.

YES: For consumers and drivers to benefit from a gas tax suspension, gas station owners should voluntarily reduce their prices once the tax is suspended. Competition may induce them to do so, but there is no guarantee as to how much of the reduced taxes would accrue to consumers. Giving a card to every car owner not only gets all the money for consumers, but also ensures that the money will be spent instead of being taken up in savings.

NO: This plan is terrible. We need to help people who are dramatically affected by gas prices. Anyone struggling to afford rising prices for housing, food, gas and utilities needs help now. We don’t need to send money to those who are just irritated by the cost. Either suspend the gas tax so everyone who buys gas saves money, or provide a way to help the working poor.

NO: Californians pay more for a gallon of gasoline than residents of any other state. One of the main reasons is that we pay more taxes per gallon of gasoline than almost any other state. And where will the governor get the money to pay this “reimbursement”? Why, taxes that the state collects! If California’s high taxes make sense, the refund doesn’t, and if the refund makes sense, the taxes don’t.

NO: Sending $400 debit cards per car encourages bad behavior. It seems political (everyone likes money in their pocket) rather than practical. Several global problems (climate change, dictators) are fueled by our reliance on fossil fuels. Use the moment and the money to increase subsidies for electric vehicles and fund alternatives (nuclear, please). If immediate relief is the goal, declare an emergency, make public transportation free, perhaps impose a profit cut on gas sales or suspend taxes at the pump.

YES: Newsom’s plan makes sense because the beneficiaries are those who are affected by rising gas prices. It would be relatively easy to identify qualified recipients using DMV records. We need to do something to support the citizens of the state given that fuel costs are now higher here than anywhere else in the United States. But we have a larger problem that needs to be solved: taxes are also higher here than virtually anywhere else – while the state has surplus revenue.

NO: All of us with electric vehicles appreciate the free money, but it doesn’t make sense to send it to everyone, regardless of how much or what we drive. Newsom’s plan is as ineffective as the PPP checks that went out to all the companies that needed help and to those that didn’t but applied anyway. It wastes billions, but who’s counting? Free bus and transit passes and lower gas taxes would be more targeted than this program to support all voters.

NO: People need relief right now. Similar to the federal child tax credit, the California Franchise Tax Board may issue an advance tax refund to each state taxpayer as a credit for the 2022 tax year. option rather than waiting until later in the year for the $400 per registered vehicle offered by Newsom. Regulations, taxes and fees contribute to California having some of the highest gas prices in the country; these should also be reduced to help relieve pump pain.

NO: Californians are facing higher prices for a range of products, not just gasoline. Food and housing have also become more expensive. Rather than a plan targeting gas, it would be better to relieve those who are also struggling with higher prices for a wider range of products. Free or reduced public transport for a short period of time will bring little relief to people who do not own a vehicle.

NO: If the purpose of the Governor’s plan is to offset rising prices at the pump, the most effective and reasonable response would be to reduce the gas tax for a period of time so that every consumer can benefit according to its actual use and past overpayments. Paying everyone $400 per registered vehicle means that some people who have multiple registered cars would receive two, three or even four times as much in payments depending on how their cars are registered.

NO: The plan should be means-tested to exclude high-income earners. Although painful, high gas prices will further encourage carpooling, the use of public transport and remote working, which will reduce gas consumption as policymakers want. The $9 billion price tag for rebates is costly. The opportunity to bolster California’s “Rainy Day” fund or reserves should be seized. These reserves will be sorely needed if a recession or a decline in stock markets were to weigh heavily on tax revenues.

NO: Short-term relief is warranted. Not all Californians need it. The state must find long-term solutions to high gas prices. Environmental charges are prudent. However, the state must produce more gas. Data indicates that California produces about 30% of fuel needs. Too much imported gas. Fixing the market would also help. Five refineries controlling 96% of gasoline are sure to lead to market manipulation. Perhaps an excess profits tax is the remedy.

Do you have an idea for an EconoMeter question? Email me at phillip.molnar@sduniontribune.com. Follow me on Twitter: @PhilipMolnar